Twitter shares the favorite spot among most of the social media savvy personnel. And if something is dear to people then they always want more of it, so is Twitter’s 280-new character limit.

Twitter, too in a way to make its users’ tweet effortlessly came up with the idea of doubling their character limits to 280 from 140 characters. Twitter announced that, “We want every person around the world to easily express themselves on Twitter.”

On 7th of November, Twitter’s 280-new character limit was updated for English-only tweets. The change is followed by months of trial and testing worldwide. The move is accredited to simplify the usage of language. Basically, Twitter doesn’t want its users to be constraint to a character limit and freely be able to express themselves.

The 140 characters confinement was set when the organization began in 2006. Since Twitter initially utilized SMS, which was limited to 160 characters, it utilized 20 for user name and 140 for content of the tweets. The new 280 character limit applies to all languages with exception to Chinese, Japanese, and Korean since these Asian dialects can express more with fewer characters.

So, already you thought of how you can use this upgrade on Twitter to your advantage. Good.  But our key insights will help you even better with all your Tweets. In the upcoming months, these changes can simplify all your challenges you faced with the 140 characters limit, for instances when you @names in responses or media attachments (such as photos, videos, polls, GIFs) will no more take up all your valuable characters. Have a glance on what’s going to change with the new character limit:

Twitter announced that these new changes are applicable for all of its users for the coming months along. Not just these, more significant changes are yet under progress.

But as a B2B marketer, there are different approaches on how this change in the character limit can turn out to be a boon or prove to be a curse. It entirely depends on how the tech savvy community is gonna make use of it.

Eventually many people are yet to give an opinion on how longer tweets will affect their business. However, looking on the positive side of the modification we still believe that it will enhance and provide better opportunities to people who have to say more.

Here are some benefits which Twitter aims to provide to all its users through its doubled character count.

Many brands have actively been able to capture attention of their clients on Twitter, although most effective communication happens through DMs (direct messages). The extended character limit implies that responses to clients’ tweets can be seen by followers as well, availing your audience with more prominent insights into your customer services and brand image. The new character length will empower more subtle elements to be shared and reactions can become more human, which is constantly positive.

In many industries such as hotels, they can now offers more detailed description and response well to their travelers, guest and others.

Marketing team could save time

Twitter had been trying its 280-character tweets with a “small audience” since September. As per the organization, clients included in the test series invested less time while composing the tweets.

Any marketing proficient who has ever sent any tweet knows the ultimate challenge of sharing a lucid idea within 140 characters. For such consolidated medium, there is always an inconsistent amount of editing required. While some buffing up will still occur in the new, longer formats, the less prohibitive count generally mean less tweaking.

Paid and funded tweets require clear divulge. Other specific businesses, for example, the pharmaceuticals and finance industries, should be labelled for compliant reasons. The additional character space implies that you can have plentiful space to get your message in a clearer way.

With more characters at use transparency and clarity will reflect in messages.

There’s simply no reason on why communications wouldn’t become more effective and easier to interpret. This involves communication both from the customer and the brand perspective.

Thoughts and any inquiry are relatively easy to put into words and less demanding to share. Obscure acronyms are not any more basic. We may even observe usage of proper grammar in the Twittersphere.

The most evident advantage of having twice the number of characters is that you can share double information in a solitary Tweet. This can possibly lessen the aggregate number of tweets brands require to convey, which can streamline digital advertising techniques.

Increase in your Social engagement

As indicated by Twitter, the individuals who tried the 280 character length not just tweeted often; they expanded engagement (Likes, Re-tweets, @mentions) and even earned new followers.

For few in the test group, an expansion in the engagement levels implied that they really invested more time in Twitter. But in terms of brands, if the same time is spent in connecting with twitter’s 330 million monthly active clients, it’s the time well spent

Including more characters doesn’t really imply that we need to involve an extensive piece of content, which could eventually get lost in the new course of a series of tweets. Consecutively for a brand aiming on to emerge, they will have to take complete advantage of videos, pictures, and GIFs that catches the attention of your readers.  As you progress into the organization focus on these components first in your marketing system; as this kind of content drives the most engagement on the majority of the real-time social communities.

Marketing is liable to disruption and the best game-plan is to remain over the most recent changes by adjusting your present campaigns and enhancing what you already own. A moderate change will enable you to move forward into the new character configuration and keep your image significant with your adherents.

As more individuals try out the new characters constraint, only time will foretell whether this will be the new trend or has to change later on. Twitter has been known to make updates or changes to things that are not working, but until now you can utilize this expansion for your advantage and reach out to more people.

Brace up your Connection with Clients.

Twitter has turned out into an essential stage for client benefits, giving organizations the chance to discuss directly with the customers on an individual and immediate level.

Customer service interactions on Twitter have expanded by more than 250% over the most recent two years alone. (source)

85% of customers say they feel more associated with organizations after following them on Twitter. (source)

With tweets conceivably multiplying in measure, the way you interface with your clients is going to change drastically.

Your business might opt to refrain from extending your tweets to 280 characters; however that doesn’t mean your supporters will. Truth be told, many will use this chance to give longer inquiries, feedbacks complaints and reviews.

While this may seem like a pain, it will be justified regardless of the extra efforts you put. 280-character tweets may appear like overkill, however extended responses towards your followers show how much your business esteems its clients and customers.

Before, most client collaboration has occurred through direct messaging, as 140 characters limit frequently lacked with regards to serving a client’s needs. With 280 characters available to you, you’ll have the capacity to react openly more often, highlighting your association with your clients to all of your followers instead of focusing on the specific individual you’re interfacing with.

Look out for Innovation.

While the already mentioned rules will set you up well for the new Twitter scene, one thing all advertisers should remember is regardless of all the hype stays- Creativity.

It’s an assurance that some brand, marketers or sales representatives will concoct an all unique kind approach to utilize 280 character tweets, and their expert thought will move others to follow along the same pattern. Indeed, you should persist on keeping your tweets brief and focus on visual substance, yet these new set of rules allow room for innovation. Try not to be reluctant to venture out your creativity and test out, insofar don’t go over the edge or negotiate on your very own twitter procedure.

There’s always a growing agony when a popular social site rolls out a major improvement. It is the capacity to adapt that isolates extraordinary social site marketers from the remaining competitors. 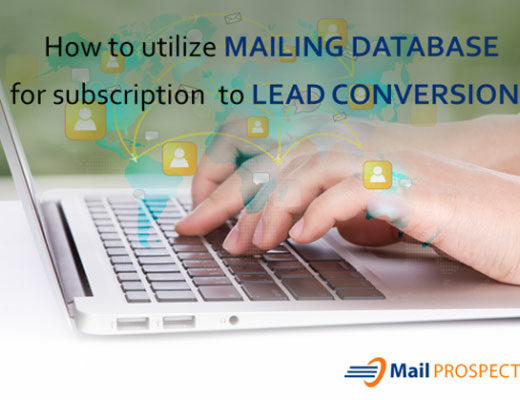 How to utilize Mailing database for subscription to lead conversion?

Understanding the concept of Social Selling in B2B Marketing